In 1878, the assets were taken control of by the Dubuque and Dakota Railroad Company and the line was completed from Hampton to Elkport in Clayton County. The final use of the bed as a railroad was by the Chicago Northwestern Railroad Company in the 1980's and Iowa Northern in the 1990's.

The original 5.4-mile Butler County Nature Trail is a railroad bed converted to a hiking and biking trail. Access to the trail is located about 1/2 mile north of State Highway 3 near Shell Rock along Butler County Road T-63. 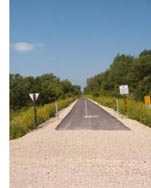 In 2001 an additional 6 miles of former railroad bed was purchased to expand the trail. Running between Heery Woods State Park and Wilder Park in Allison, this stretch of trail features a 400 foot converted trestle crossing the Shell Rock River and runs along the north edge of Wolter's Prairie Preserve. Access to the second section is located at the end of Traer Street in Clarksville or from Wilder Park in Allison.

The original 5.4 miles of trail is surfaced with leveled, packed limestone scrapings, the newest addition to the trail is surfaced with asphalt. All the original railroad trestles have been renovated with concrete, asphalt, or wood decks and railing to make the trail safe and easy to ride for most cyclists. The access areas have parking and toilet facilities. Picnic tables are located along the trail.

Several restaurants are available in Shell Rock, Clarksville, Allison and Waverly. Patrons can choose from fast food, country-style dining or elegant sit down meals in a variety of places. Convienence stores are located near the parking areas in Shell Rock, Clarksville, and Allison near the trail access for those needing gas and other small items.

Future of the Trail

Perhaps the biggest goal is to connect Heery Woods State Park with Beed's Lake State Park. Both the Butler and Franklin County Conservation Boards are hoping to make this a reality. A group of interested citizens, town council members and conservation volunteers are also working to find ways to connect the dead ends between the existing trails and to connect trails from Bremer, Butler and Franklin Counties to the Cedar Valley Nature Trail. If you would like to take part in this these meetings, contact the BCCB at (319) 278-4237 or 278-1130 for more information. 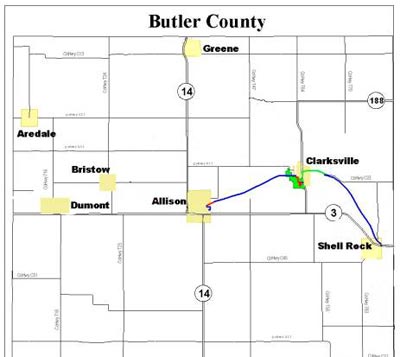